All NOW Available For Pre-Order!!

Forever Red Publishing surprised me yesterday, with all four books in my, One Day at a Wedding Series, going up for Pre-Order. I am so thrilled to have them out in the world and I cannot wait for all of my readers to get their hands on them. Once Upon a Wedding will release on 12.12.14, with the next book in the series out every 2-3 weeks, until the end of January! It’s going to be a fast and furious two months, filled with weddings, love, a little lust, and two super hunky men!
Once Upon a Wedding: Book One–http://www.amazon.com/dp/B00Q5L7O2K
Cassie Anderson, bridesmaid extraordinaire, is tired of attending her friend’s weddings either solo, or with her best friend, Thad. Finding a real date is simply too much work. Especially when she sees an old acquaintance from high school, Dan, at her friend Shelley’s wedding. After the spark shared between them, Dan has become the object of her affection. Too bad he has a nasty habit of having a date on his arm at every turn. Stealing another woman’s date is against the rules, but if she could just catch him alone…well, that would be fair game! Unfortunately, timing is everything, and she and Dan seem to have the worst. Always the bridesmaid, walking away with nothing more than a dreadful dress, Cassie is committed to changing her luck and getting her man!
Every Other Wedding: Book Two– http://www.amazon.com/dp/B00QOKR46S
Cassie Anderson has been the girl of Dan’s dreams since high school. Unfortunately, her return to his life comes at the worst time possible. As he tries to put his life back together, he keeps an eye on her, hoping to find her single at the right time. A time when it all hurts a bit less. A time when he can offer her all of the love she deserves. After three weddings of happenstance meetings, Dan finds himself to be a little more ready for everything that is Cassie. Putting himself out there, he can only hope she is everything he thinks she might be — his forever girl. Anything but a Wedding: Book Three–http://www.amazon.com/dp/B00QOLD3NA
Thad never expected to find anyone who meant more to him than his best friend, Cassie. She was the one woman he loved enough not to sleep with. He was a player, but an honest one. Unfortunately, not everyone felt that balanced out his love ’em and leave ’em ways. He just didn’t see a need to settle down — yet. Then, he met Brianna, who made him think about the future — a future with her — which was a new experience for Thad. Brianna is also a new kind of woman and convincing her that they have a future might just be the challenge of his life. Not One More Wedding: Book Four–http://www.amazon.com/dp/B00QOM3VAY
Brianna works through men like she works through her closet — seasonally. Any other way has always been trouble. When she meets Thad, she is thrilled. Not only does he intrigue and excite her, but he is just like her — noncommittal. He sets her on fire with his smooth talk and honest approach to dating. Even without being physical beyond a kiss, the thought of him makes her entire body hum. Except, Thad has gone and gotten attached to her in a way neither of them expected; attached in a way she simply cannot allow. Unfortunately, he won’t allow their relationship to become physical until she surrenders her heart to him, which is a battle she isn’t sure she can win. The longer it lasts, the less sure she becomes of wanting it to. 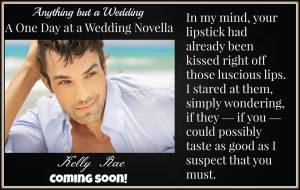 Thanks for stopping in today and I hope you will head over to Amazon and Pre-Order your copies, today!

Wishing you well, in fiction and real life!

There was an error retrieving images from Instagram. An attempt will be remade in a few minutes.